Hay Test can Lead to More Efficient Feeding During Drought 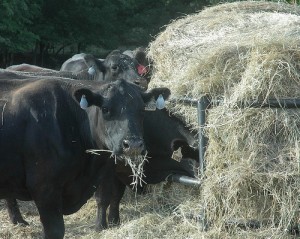 COLLEGE STATION – An inexpensive hay test can offer the best guidance as to how much supplemental feed is required for a beef cattle herd, and at the same time, save ranchers money, according to a Texas AgriLife Research scientist.

A hay test can cost $50 or less, and many ranchers may be feeding more hay or supplement than they have to or the wrong type of supplement. A hay test will reduce the likelihood of both situations. (Texas AgriLife Research photo by Blair Fannin)

“With feeding programs being one of the most costly components of a cattle operation, every penny must be spent precisely, especially during these historic drought conditions,” Wickersham said.

A hay test can cost $50 or less, and Wickersham said many ranchers may be feeding more hay or supplement than they have to or the wrong type of supplement.
A hay test will reduce the likelihood of both situations, he said, noting that his recent research evaluated both variability in crude protein content and digestibility with Bermudagrass hays.
“The outcomes were a (bit) more variable than native grasses,” he said. “The outcomes depend on how much it has been fertilized and how mature the Bermudagrass is.”
The study found that increased Bermudagrass utilization (intake and digestion) with increasing nutritive value supports the recommendation of feeding high-quality hay.
“However, there must be a balance between optimizing quality, quantity and cost when producing hay,” Wickersham said. “These observations from the studies clearly demonstrate the value of purchasing and marketing hay based on nutritive value.”
Wickersham said a hay test can provide information on both crude protein content and forage digestibility, if requested.
He advised ranchers to test their hay to get a more accurate gauge as to how much supplement and what type of supplement to purchase and feed.
“Producers with higher quality hay may want to look at lower priced energy supplements and reducing hay availability as a means of conserving forage, reducing cost and maintaining body condition score,” Wickersham said. “With the current hay prices, you don’t want to give them unlimited access to hay. You don’t want to put 10 bales out and come back 10 days later.”
In contrast, Wickersham indicated that producers with lower-quality hay will need to pay attention to providing a supplement with adequate levels of both energy and protein. In either case, a producer can make a much better decision with information on hay nutritive value.
Additionally, bulk feeds can be an efficient method of feeding cow herds, but you have to have infrastructure in place to do this or evaluate the cost of adding this capacity, Wickersham said.
“Drought demands that producers find the cheapest source of energy they can realistically handle and safely feed,” he said. “Unfortunately, cheap is more than it used to be.”

This entry was posted on Sunday, March 18th, 2012 at 5:05 pm and is filed under Cattle, News & Update. You can follow any responses to this entry through the RSS 2.0 feed. You can leave a response, or trackback from your own site.

Is it time for fall fish days and pond stocking? Do you need to stock your pond with quality fish? Mark your calendars for Smith Farm Supply Sandersville Fall Fish Day on Friday, October 11th at 11:00 am.

Our fish supplier is Southland Fisheries Corp. from Hopkins, South Carolina. Since 1981 this pond stocking supplier has been specializing in raising top-quality fish for their customers. They only raise top quality fish with the highest success rate. We offer a variety of fish that will benefit your pond best. All stocking recommendations are based on the notion that your pond is generally healthy (fertilized, limed, etc.) and you are feeding your fish the recommended amount. Recommended stocking numbers are for a pond that has little to no pre-existing fish and is fertilized, limed, fed, and properly maintained.  Stop by during our Fish Days and they can provide you with their expertise on how to stock your pond.

Smith Farm Supply Warrenton Store fish day is scheduled for February 28th! Mark your calendars and get ready to stock your pond with quality fish from our supplier, Southland Fisheries Corporation.

Since 1981 Southland Fisheries Corporation in Hopkins, South Carolina has been specializing in raising top-quality fish for its customers. They only raise top quality fish with the highest success rate. The fish they provide are healthy and flourish here in the waters of North Georgia.  Stop by during our February and March fish days and they can provide you with their expertise on how to stock your pond.

Smith Farm Supply carries a variety of fish food to make sure your fish continue to grown and thrive in your pond environment.

Stop in or give us a call and one of our friendly staff members will help you decide what fish varieties best suit your pond. Contact us, we look forward to helping you. We look forward to seeing you at Smith Farm Supply’s Warrenton Store Fish Day.